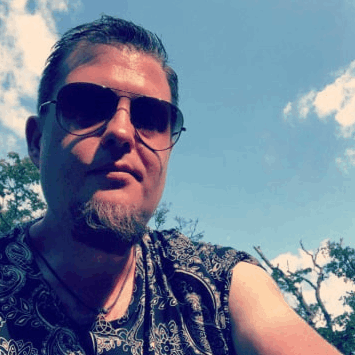 The brain behind Cosmic Serpent is Magnus Forsberg from Stockholm, Sweden. He has a long history as a muscian and producer, starting way back in the beginning of the 90s, where he played in a heavy metal band as a drummer and later guitarist. In the mid 90s he got in contact with the psychedelic trance scene through close friends, on a similar journey within electronic music. Artists like Hallucinogen, Astral Projection, Electric Universe, Transwave, Infected Mushroom, Man With No Name (and MANY more) has been a huge inspiration for this new music project, but also a variety of outside-of-the-scene kind of music. In 1999 Magnus founded (with a few friends) the psychedelic trance and techno web-site in Sweden called Mandarin, and it soon grew to one of the most popular sites in the Swedish rave scene. In the beginning of 2001 he started producing progressive psychedelic trance under the alias Kalimax (together with DJ Tony Comanti), released on labels such as Tribal Vision Records, Midijum Records, Synergetic Records, Groove Control Records and Oxygen Records. As well as organizing and playing at various forest and club parties in Sweden, he has performed at parties abroad. In 2018 he started producing psytrance full time, under the name Cosmic Serpent. Cosmic Serpent was first released on Suntrip Records in 2018, and later on Geomagnetic / Goa Records. This project delivers psy and goa trance with a darker touch and forest feeling, and of course a reflection of personal experiences. That
being said, different styles of his project will find its way to different labels focusing on the specific style.

Web page was built with Mobirise