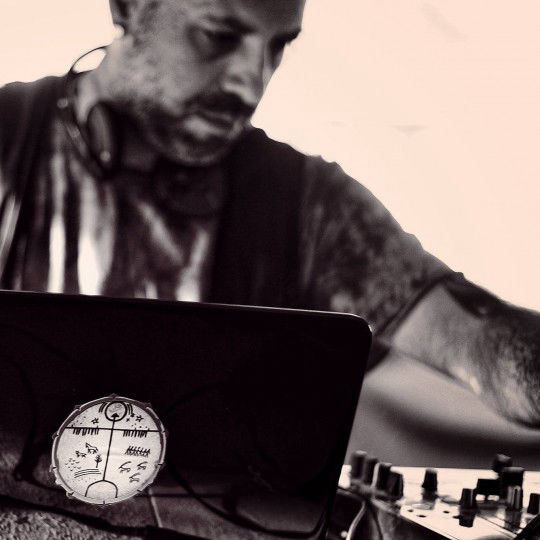 Having made his initial mark as co-founder of influential psychedelic duo “Atriohm”(now performed as a solo act by Leo’s brother Sashe), Leo Golcev has forged a powerful and enduring creative identity as Tengri. Matching a fiercely original sonic vision with deep atmospheric and psychedelic storyline his music embodies an emotional and spiritual voyage that echoes some of the Leo’s most intimate experiences and encounters with the world and people.
As an accomplished producer and formally trained pianist, Leo first came in contact with psychedelic music in the early nineties. Influenced by the early developments of psychedelic chill and goa music combined with dub, ethnic, deep and atmospheric sounds, he soon ventured into music production. It is precisely that balance of complexity, musical curiosity and thoughtfulness that has fueled a renewed sense of Leo’s musical presence in past twenty years.
The sonic vision and emotional honesty that drive Leo’s music have been consistent throughout his successful musical career. After more than a decade with Atriohm, during which time the duo toured the world together, Leo opted for a more relaxed lifestyle and dedicated himself exclusively to the exploration of various downtempo forms and the production of genuinely exceptional ambient music. By adopting the alter ego of Tengri, he quickly established a distinctive sound, as well as an adventurous production approach that forthrightly aimed to give primacy to the raw immediate experience of music without much studio/production compromises. As a consequence, the first solo psychedelic chill album, 2012’s “Icaros” (Peak Records) made an instant impact with fans and critics, as did subsequent singles releases.
Five years after the first release, Leo’s second studio album, intriguingly titled “Old Soul” takes another path. As a forthcoming release (Parvati Records), this psychedelic trance album marks a milestone for the multifarious Macedonian producer. The consistently riveting psychedelic mood of the album marks a timely return to musical roots for Leo, whose innovative, influential body of work has established him as one of the most potent creative forces in the world of psychedelic music. The album defines itself by honest and organic sound design. Indeed, Old Soul is stunning work of psychedelic music, full of lush and haunted atmospheres, nervous squelches and aggressive leads that evolve against a melodic, almost serenity-inducing backdrop. It’s genuine sonic self-expression of an intriguing musical novelist who has ostensibly until now left too many stories untold. With this album, Leo’s presence in the world of psychedelic music receives full circle.